As our name shows, we are a group working to preserve games. Our target includes a wide variety of games including arcade games, home video games, PC games etc. This time, we will be showing how we preserve our games using a game from the dawn of PC gaming – “Galactic wars 1”.

■ The History of Nihon Falcom

Nihon Falcom has its base in Tachikawa, Tokyo. It was founded in 1981 as “Computer Land Tachikawa”, a computer shop selling mainly Apple products.  The following year, they produced and sold their first PC game. 1984’s “Dragon Slayer”, 1985’s “Xanadu” and 1987’s “Ys” and “Sorcerian” being big hits of the time established Falcom’s status as a powerful competitor in the world of PC gaming. They are a time-tested company still making popular games such as the “Trails of Cold Steel” titles under “The Legend of Heroes” series.

One of Falcom’s memorable works is “Galactic Wars 1”, a Sci-fi simulation game.

The creator of “Galactic Wars”, Yoshio KIYA, was a regular customer at Computer Land Tachikawa. He was famous later for making the “Dragon Slayer” series. The PC gaming magazines of the time called him the Star Programmer.

“Galactic Wars 1” was a product of Kiya’s hobby, programming. Falcom, a computer shop at the time, decided to publish it. And that was how it debuted. “Galactic Wars” was not the only one, Falcom’s early games were almost exclusively made by their regulars. They only started making their own games when business picked up around 1984.

“Galactic Wars” was written in BASIC. Kiya developed it on an FP-1100 by Casio which was rented to him by Falcom, and so it was sold as a game on FP-1100.  Even though it was later sold on NEC’s PC-8801 and PC-9801, it was ultimately published by a small, obscure shop. Which meant that there was only a limited supply. Because of that, it is almost unseen on second-hand shops and internet auctions, making it very, very rare.

■ Stumbling Upon an Actual Copy

We at the Game Preservation Society had the luck to stumble upon this very, very rare piece. It all started because this author had a chance to come in contact with Mr. Kiya.

Unbelievably, he had a copy of almost every game he made at Falcom, all of them unopened. It seems he only had it for sentimental purposes, but these games are very valuable in terms of preservation

After numerous conversations with Mr. Kiya, we had the opportunity to explain and convince him about the importance of preservation. When we explained how important his collection was, he generously placed an unopened copy of “Galactic Wars 1″(PC-8801 version) in our care, for preservation.

This is the package we received from Mr. Kiya. 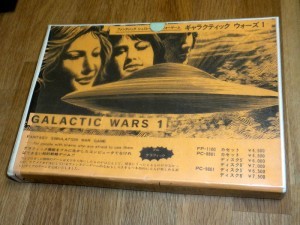 Summer in Japan is hot and humid, which means the first problem we face is “mold”. If there is moisture, the magnetic disk of a floppy disk is a healthy environment for mold. Not only are we unable to read a floppy disk with mold, the disk is also at risk of being damaged.

Opening the package. A nervous moment. 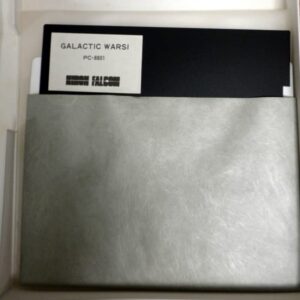 The floppy disk sleeve and manual that came out looked mold-free and clean at first glance. But under further inspection, we found that there were wrinkles that were a result of water drying off, evidence that they were exposed to moisture.

The floppy disk. This looked to be in good condition at first glance, but look at it from the side we found that it was slightly bent. There was uncertainty that we would be able to read the data. We spun the magnetic disk to check for mold and sure enough, there were some, not large patches, but they were there. 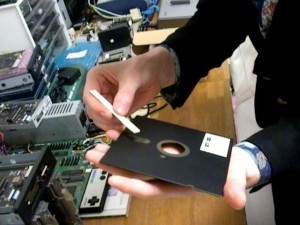 Before we start preservation, we need to clean off the mold. We dab a special cloth in 100% isopropyl alcohol and wipe off gently the mold.

Once we have wiped the mold off, we check the condition of the disk. For this disk, there are only 40 tracks used, so we read the 41st track and see what happens with the disk, physically.

Fortunately, the magnetic disk was not damaged and did not peel off because of the bend. Since it was perfectly readable, we move on to the preservation phase.

We use KryoFlux for preservation. KryoFlux is a device that can read the source data on floppy disks. It was co-developed by our current president, Joseph REDON, for the preservation of Japan made games.
The floppy disk of “Galactic Wars 1” is already 30 years old, so we could not expect to be able to read it as many times as we needed. It would be ideal if we could save all the data in one reading. But as we proceeded with the process, we found 1 spot that was unreadable and 1 spot which possibly was not read properly.

The image above shows the surface of the floppy disk, the formatted sectors looks light green and the parts that look a darker green is where the game data is written. Parts of the section that should be dark green appeared to be bluish and could be the cause of problems in the process.

We removed the disk and cleaned it of mold, again, and repeat the process. The section that was unstable the last time showed the same result so we concluded that it had been read properly.

However, the part that could not be read the last time also showed the same error. It could be that mold wasn’t the reason after all and the disk is just damaged. We remained hopeful and cleaned it for the third time and repeated the process.

And the result of our third try is…….

The part that was bluish in the previous image had been turned dark green. All of us at the scene were filled with excitement and relief.

With that, the preservation of “Galactic Wars 1” had been a success. Once the data has been preserved, it is available as a disc image to play on emulators. 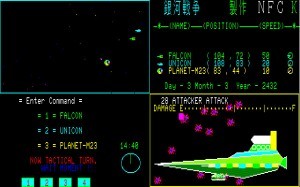 This game is set around the planet “M23” of the Galactic Alliance which is under attack by the Third Empire. Players are in control of the alpha fleet which is charged to protect the planet. The difficulty can be set from 1 to 3. The player commands scout ships from the planet (PLANET-M23) and 2 ships (FALCON and UNICON), a total of 3 scout ships, to search for enemy ships. The command phase has a time limit. A clock with just one hand measures this. Once the hand has made one round around the clock time is up. Commands have to be completed within this time so there is a certain element of real-time strategy in it.  This is something in common with “Dragon Slayer” which came after. The fleet and scout ships can be controlled by direction (24 directions on a 360-degree surface) and speed (1~50). If any of them encounter enemy ships, battle will commence using predetermined attacking and defending ships’ stats. The player clears the game by destroying 3 ships. The game required strategic decisions in a semi-realtime environment, and by standards of the time, it was considered “playable”.

By the way, “Galactic Wars 1” deletes part of its booting sequence upon starting the game and rewrites it when you start gameplay. What this means is that if you don’t follow proper procedures after booting the game, the data will be lost forever. This is thought to be an anti-piracy trap and a pretty “evil” one at that. Because of this, even if we had a used copy of “Galactic Wars 1”, we have no guarantee that the data is intact. So it is vitally important that we found an unopened package.

■ Preserving the Jacket and Manual

We don’t only preserve the data on the floppy disk. The jacket and the manual are also subjects of preservation. So the next step is to digitally scan the jacket and manual. 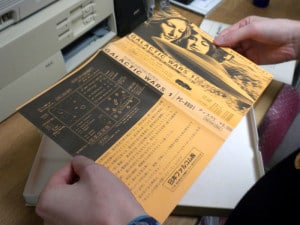 While doing this, if the paper is not completely flat, there will be space between the surface of the scanner and the paper, making the quality of the scan less than ideal. To prevent this, we remove the jacket from the box and file it while stretching it out flat.

The actual scanning process only starts after over 6 months. Compared to 6 months before, the bent paper will be almost completely flat.
We then prepare to do the scanning. Firstly, to prevent any dust from getting onto the scanning surface, we use a special cleaning kit to clean the surrounding area, as well as the scanning surface. If we use auto-correcting functions of the scanner, we might get unexpected distortions in the resulting data, so all these functions are disabled to get a completely raw image of the jacket.  To ease the process of repairing the image after digitization, the resolution is set to 800dpi. 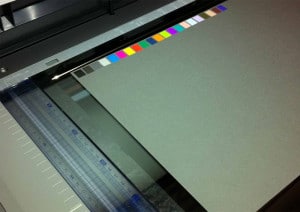 We place a ruler beside the scanning surface where the jacket is positioned for scanning. By doing this we can get a measurement of the scanned image. We also use a grey-colored board for the background of the image. Grey because it has minimal interference on the colors The board also has a dedicated calibrated color palette which tells us if the color on the original image has faded. 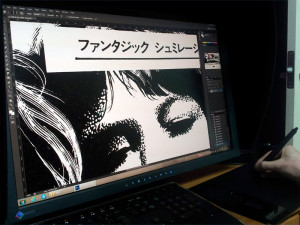 We use Photoshop to mend the image, Any damage or dust on the image is removed. We were lucky this time because the jacket had minimal damage so large-scale mending was needed. In cases where that is needed, such as when the jacket is torn or severely faded, we need to prepare several copies. 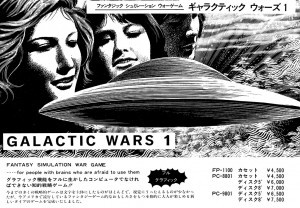 The result is this.

The original paper that it was printed on was orange, so the image itself is black and white.
Back in the days, Falcom used different kinds of paper (in color or otherwise) for different computer models. So the FP-1100 version and PC-9801 versions might have different packaging colors.
What this means is if we print the image on the same paper, we can recreate the jacket.

With this, we are very lucky to be able to preserve a piece of very rare software.

Members the Game Preservation Society have contributed a lot to our collection of games, but even so, there are many valuable games that we do not possess. As they all require a lot of work to successfully preserve, and we only have limited manpower, our progress is very slow.  If anyone out there is interested in preserving this part of Japanese culture, please do consider working with us. Every little help is appreciated.

Our organization will always be working towards preserving all games.